Baby Insists that Birthdays are About Balloons 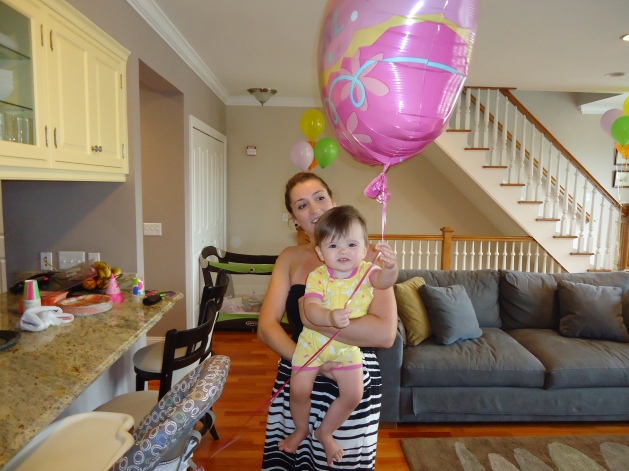 Maddie Exposed to Sharks in a Pond

It was all pomp and circumstance as Maddie’s relatives made their way into the New York Metro Area for the baby’s very first birthday party. Maddie’s countdown is on as Olympic Committee Officials continue to fret that the baby’s big day has already completely overshadowed interest in the games. Word of last night’s punch drunk interpretative history of the UK during the opening ceremony still has Maddie scratching her head.

As Maddie was returning from her late walk yesterday, she was probably anticipating a little dinner and bed. However, she knew that when she walked into a room full of aunts and uncles, her agenda had been amended.

Aunt Joni had a game on the computer all ready to go for the little princess. It was called “Sharks in a Pond,” and everyone was drawn to the screen. Maddie fearlessly plunged into the game wondering how these salt water predators ended up in a pond in the first place. She worked the touch screen furiously trying to unlock the mysteries of the game.

After 15 or 20 minutes, Maddie became a bit overwhelmed by the all family and sharks in the room. She got more than a little cranky and decided to skip the opening ceremonies and go to bed. We all should have been so lucky!

Maddie obviously has a little too much on her plate right now.

Her mom is on the road – New teeth are breaking through – And she’s racking up the miles. Factor these things together and Maddie is running on a short fuse.

She’s actually dealing with the stress quite well. Most of the issues are once again surfacing during the clothing and diaper changes. It seems like every time we have to change one or the other, Maddie is fighting mad.

She actually screams as if she is being interrogated underneath a long-forgotten Gulag. When other people hear these crazed protests, they worry that the baby must have fallen off of the changing table.

It doesn’t last long – once the change is completed, the baby is all butterscotch and ponies again. We have theorized before that it is always better not to mess with Maddie, but she can’t wear the same clothes all the time.

So, the question is, how do we alter Maddie’s perception that changing her clothes somehow violates her life, liberty and pursuit of happiness? There must be a way to distract her, but so far nothing seems to work.

We’ve gone through this stage before, but her protests have never been so over-the-top as they are now. As always, all suggestions are welcome!

Her aunts and uncles were sleeping without care
But Maddie’s disposition was off, temper ready to flare

Now the volume was rising, time to wake up the house
The burp cloth now covered, PaPa’s sleeve and her blouse

Maddie unleashed a small scream, and threw one of her toys
No one knows what she wants, but she’s bringing the noise

It’s 4 in the morning, isn’t it time to wake up?
Santa’s long gone, hey PaPa, giddyup!

We creep downstairs, in hopes of calming her down
But the baby has other ideas, you can tell by the frown

The house is awake now, confusion starting to spread
Why is the baby fretting, she’s been changed and been fed?

Just when all seems lost, a smile appears
Is there new hope, an end to the crying and tears?

Maddie’s eyes now grow heavy, not making a peep
The house falls silent – one and all back to sleep!

Maddie celebrated her first Thanksgiving holiday in style surrounded by loving relatives in Northern Virginia. A good time was had by all, but with so many activities underway across the house, Maddie repeatedly refused to participate in the napping process.

The baby rolled out this afternoon showing off the latest in turkey-wear including her gobble-gobble shirt with a little turkey on her butt. Maddie spent special one-on-one time not only with her grandparents, but her aunts and uncles as well.

The girl just loves a party and is always terribly nervous that she might be left out of the festivities. So she waged a single-handed war against every attempt to put her down for a little shuteye.

Some naps lasted 15 whole minutes, but most never made it past ten. Even after the sun went down, Maddie was still too hot to trot. During a 9pm diaper change, the baby was flailing on the table like it was 6am – wide eyed, wide awake and chattering away like a wild little monkey.

So PaPa had the unenviable task of trying to put the wild banana to sleep. However, after 30 minutes of wild howling – it was time to call in Grandma. Grandma did just fine until she tried to put Maddie down and that’s when it hit us – Anybody trying to put the baby down is enemy!

These trials continued for some time proving once again that when you break the baby’s normal routine – you MUST pay the piper!

We put Maddie to bed three times last night and three times she came up swinging. After yesterday’s travel tribulations, we had to expect some level of payback and to quote Brad Pitt from the movie, Inglorious Basterds, “Cousin, business is a’booming.”

Maddie woke up with a big smile on her face early this morning and showered her grandparents with all the charm a four-month-old could ever hope to exude. But around 6pm, things seemed to drift a little bit off course – could the gales of November come stealing?

The clouds around Maddie seemed to darken, but she was fighting the good fight and with a little snack before bedtime, it might all end well. We laid Maddie down and it looked like lights out, but looks can be very deceiving.

Ten minutes later the wind in the wires made a tattle tale sound and the exhausted baby vowed to not go down without a fight. She came up swinging like the young Mike Tyson, going for the 90-second knock out.

She bucked and screamed, but it all ended as quickly as it began – peace was restored and Maddie was back into the land of dreams in a matter of minutes.

But don’t pop the champagne just yet – 15 minutes later, waves crashed over the railing and the gales of November came slashing! Maddie lost all semblance of control this time and it was off to the races.

Crying, hyperventilating and a hurricane force cry that threatened the safety of the entire crew. The tears rained down and the inconsolable sobs echoed across the void. Maddie was readying for a temper tantrum that she hoped would echo through eternity.

Gina was shaken by the ordeal, but for once, the baby had more bark than bite. Although her breakdown was impressive, it didn’t have the usual staying power that Maddie has become famous for. Hopefully the baby will get some good sleep tonight, because tomorrow she will have a plethora of aunts, uncles and turkeys to contend with.

Being the star of the show for an entire weekend is a tall order to fill for 10-week-old little girl, but Maddie made it through with flying colors. With a slew of aunts, uncles and grandparents vying for young Maddie’s attention, she did her best to spend a little bit of time with everybody.

It all started with Maddie’s baptism and reception on Saturday morning. We drove into freak-show central (New York City) and dressed Maddie in a stunning little baptism gown that she borrowed from her close friend Lilly. Lilly wore her’s just a couple of months ago and decided to let Maddie borrow it for special day. Maddie’s friend was a hit at the baptism as she made several very cute baby noises to cheer on the show.

We were very lucky to get Maddie baptized by Father Anthony, the same priest who baptized Stay Home PaPa and also presided over the marriage of Maddie’s parents. It was very a warm and personalized service and Maddie cracked a huge smile as soon as the Father Tony touched her forehead with the oil.

After the service, we made our way to a reception on the banks of the Hudson River with a spectacular view of Manhattan. Maddie took her time charming each and every guest at the table and the lunch was big hit.

When all was said and done, Maddie enjoyed an amazing weekend with all of her aunts and uncles, but now it’s time for some serious R&R. Maddie needs some quiet time to recharge her batteries and get herself back to a nice normal schedule. As for her parents, there are not enough hours during the night to ever catch up, but we are enjoying every minute of it!