Sadly, the word “NO” is becoming an increasingly ambiguous term in our household. After devouring a bagel like a ravenous jungle cat, Savannah decided that it was only fair that her Daddy should share his few precious remaining chips with her. Daddy however, did not think that this was a good idea at all. 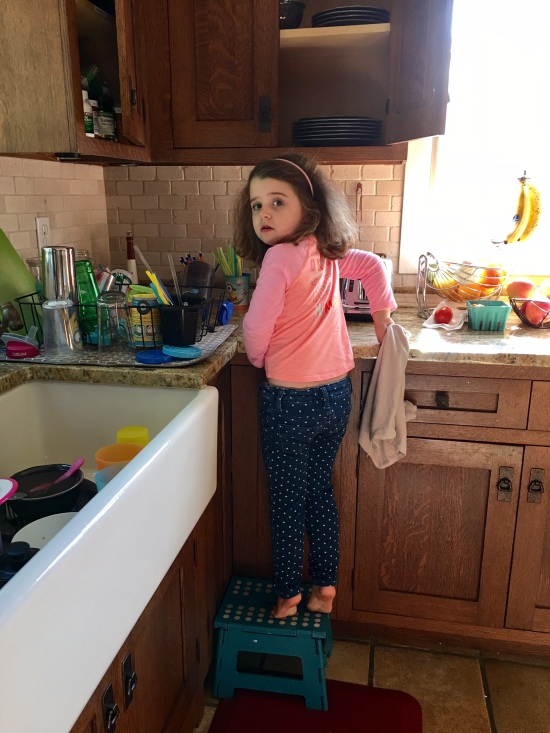 “Honey, these are my chips. You’ve had breakfast and just finished a bagel.”

“But Daddy, I NEED CHIPPIES”

I placed the tiny plate of chips into the center island of the kitchen. Savannah used her Go Go Gadget arms to snatch her first chip.

I was hoping to enjoy these chips while putting some groceries away.

Next, I opened up a cabinet and placed the chips up on a shelf.

I thought this would solve the problem once and for all. I ran out to the car to get one last bag of groceries and came back to my 3-year-old, crunching yet another chip while elongating herself off at the top of her stool.

I kept looking for higher perches as she followed me around the kitchen with her trusty stool.

In the end, I did get two chips, but it was clear that Savannah has the upper hand.

Getting Serious About Cereal

I Express Myself Through Spaghetti

Maddie Baits and Switches Her Grandpa

Even when she’s chowing down, Maddie is unable to curb her mischievous nature. Proof of this surfaced yet again during lunchtime with the grandparents.

As usual, Maddie was enjoying various samples from around the table. However, her favorite food during this lunch period was definitely spaghetti. Spaghetti is awesome because of its amazing gaming potential.

Maddie made sure to catch her grandfather’s eye as she was making a lasso with a small string of my pasta. She very sweetly held out her hand to grandpa offering to share some of that delicious spaghetti with him. Touched by the gesture, he gently reached out to accept her tender offering.

As soon as his hand was about six inches away, she snatched the pasta away and slammed it into her mouth. Then she made small grunting noises as she feasted on not just the food, but also her victory. The whole table erupted into laughter as Maddie chomped on her false offering.

Encouraged by the raucous laughter, this game included about three more rounds as her grandfather was also an eager participant. Once again, that stunning little personality is growing into a true force of nature.

Maddie is the Rice Whisperer

What started as a quick jaunt into Jersey City became a night out on the town for the entire family. This was a big day for Maddie because she had already enjoyed a great unplanned lunch out with her mom and a few friends.
The whole family was basking in the perfect weather outside when we were suddenly overcome by the intoxicating smells drifting out of Marco & Pepe’s restaurant. Suddenly Maddie’s parents were plotting and conspiring on how we could eat dinner here and still get the baby fed and to bed on
time.
After a quick discussion, we green-lighted dinner but had to score a bib for the baby first. We popped into a nearby drugstore and Maddie unexpectedly hit the panic button. Gina rolled Maddie outside and I ducked into a nearby Dunkin Donuts for a Priority One emergency bagel. I handed Maddie a piece and the crisis was averted – just in time for dinner!
Maddie feasted on a small basket of unsalted sweet potato fries while enjoying the music pulsing just a few blocks away from a local street festival. Maddie made a real meal out if going back and forth between the fries and generous portions of peasant bread.
When the main courses came, the baby even tackled her mom’s trout entrée with reckless abandon. With each bite, she took time to smile at and woo her fellow restaurant patrons along with our server.
The little charmer had her fellow customers literally eating out of her hand. Finally Maddie had her fill of food and attention and was ready to head home. A great time was had by all and Maddie indicated that she’s ready for round two tomorrow.

The Many Faces of Mashed Potatoes

It was with great pleasure today to finally introduce Maddie to one of life’s great pleasures – The amazing world of mashed potatoes.

If there is a better food out there, I am unfamiliar with it. So after a day fraught with bagel pieces, water melon and strained prunes, Maddie deserved a real treat.

We all sat down for a nice dinner. The baby started off with strawberries, as mom and dad were ready for meat and mashed potatoes. I was about to sit down when Maddie’s mom suggested that maybe it was time to share some mashed magic with the baby.

What an idea – but I wondered, would Maddie embrace “squished taters” like her dad? This has been my favorite food since I can remember and it’s always been a private joke in my family.

So how would the baby react to her first taste of mashed gold? I reverently placed a small portion on Maddie’s tray. She eyed it suspiciously at first, but then reached out and grabbed a handful. She worked the strange mixture between her fingers getting a good feel for it. Just as we were wondering if she would ever bother to taste it, she jammed some into her mouth.

Then two things happened, she smiled at the taste but was confused by the consistency. Maddie continued to work that mouthful of potatoes, trying to decide if the taste was worth the work. Two helpings later, Maddie was ready to join a long list of nationwide mashed potato lovers! Welcome to the club Maddie!

As I have stated in the past, Maddie is a spectacular eating machine. She has mastered a wide variety of foods across the eating spectrum. She tears into each bite with an unbridled exuberance that is difficult to properly describe. But there are days when her eating is just for show.

These are the dog days of eating when you don’t discover that the baby wasn’t actually eating until you lift her up. It turns out that our 40-minute eating session this morning was nothing but a mirage. Maddie the illusionist seemingly destroyed multiple chunks of banana, watermelon and bagels. I was sitting right there in front of her watching her place the chunks into her mouth and go to work.

I noticed a few pieces fall by the wayside down into the depths of her lap, but didn’t really give it a second thought. Sometimes there is a little collection of chewed food to pick through after Maddie has been sprung from her chair. I expected some cleanup after our meal today, but I was not prepared for the power and the glory of what Maddie had compiled today.

I removed the high chair table and stopped dead in my tracks. Maddie’s bare legs were camouflaged in this morning’s full array of breakfast. From the waste down, it appeared as if Maddie’s legs were made of fruit and bread. It was like a three layer baby bean dip with exotic watermelon pinks on top, creamy banana in the middle and a flaky crust of wet bagel dough as a base covering her skin.

The watermelon pieces were all chewed down to about the size of raisins and the bananas looked to be straight out of a blender. The bagel doe was not as refined as the rest of the dish, but it was still most impressive. What strikes me is that this was all somehow put together while I sat right in front her while her hands were placed on top of the table.

When I lifted Maddie out of the chair, even more ingredients began spilling out from hidden places all over the floor. It dawned on me that I never got to taste this baby dip, but the grades are in. Maddie scored high marks for execution and presentation and an “A+” for stealth and sneakiness.